How to amend, edit or remove an invoice and associated charges

Written by Robert Ollett
Updated over a week ago

If you need to amend an invoice that's been issued or void it due to an error or it not being payable anymore, read on.

While much of Habu is super simple and intuitive, there are areas that are more abstract. Understanding the theory will turn you into a Habu master.

Charges are essentially an editable, pre-invoice state that provides flexibility prior to invoicing. To edit or remove a charge you'll need to go to the source of where that charge was created (i.e. in the booking, in the order list or in the list of charges).

There is one type of charge that isn't editable and they are charges related to membership subscriptions and membership add ons. I'll explain how to deal with these later.

When it's time to request or take payment, either manually or with auto-billing, charges are turned into invoices as the payable state of the charges that have built up.

Once the charges have effectively been collected into an invoice, there are several states an invoice can exist in, which affect how changes are able to be made:

You have complete flexibility with making changes to draft invoices and being able to remove them completely. This is because it hasn't been seen by the receiving party as it hasn't been emailed out. Once it's been emailed, the recipient will have had the opportunity to pay the invoice, which is why an issued invoice cannot be removed.

The mechanism is the same for amending or removing an invoice, but the consequences vary according to invoice state. To alter an invoice you need to click on the triple dots and select the option available:

With a draft invoice, you have the option to 'Remove Invoice'.

You'll get this pop over:

Once you've clicked 'Confirm' this will:

Editing or Removing an Issued Invoice

The pop-over you get will provide you with a couple of options:

It's vital that you select the correct option here. If you don't want to see the charges or the invoice again, make sure you check the 'Write off charges' box. If you don't do so, the charges will be reassigned to the contact. If you have auto-invoicing set up, these charges will be collected into a new invoice and potentially emailed and payment taken, depending on your settings.

If you'd like to edit the charges and re-invoice then leave the 'Write off charges' box unchecked. This will reassign the charges to the contact, effectively making them live and editable. To change or remove a charge you need to go to the source of where the charge was created:

I've highlighted how to edit (a) booking charges  as well as how to remove (b) products (under 'Orders') and (c) one off charges below: 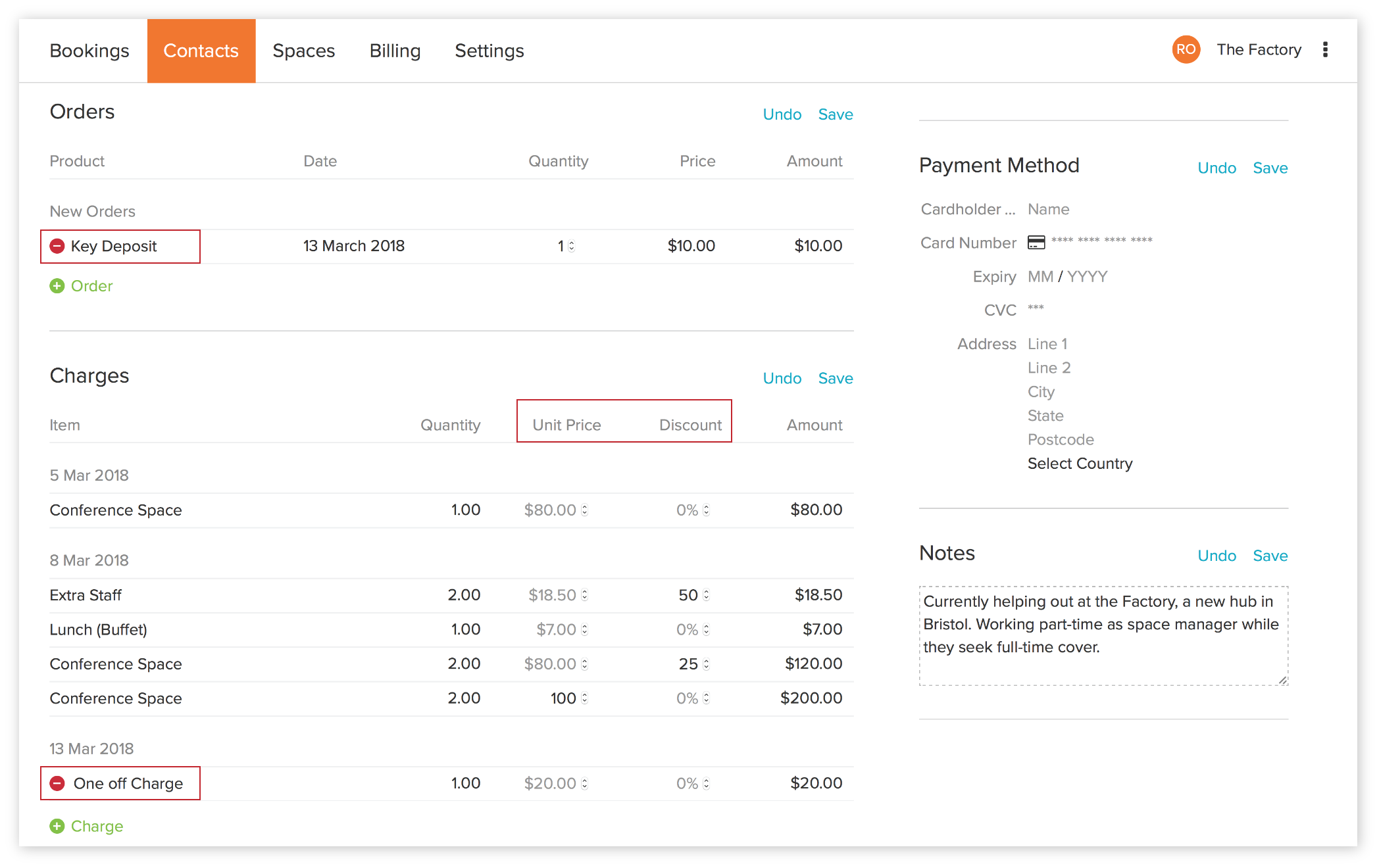 Once you're happy with the charges and are ready to re-invoice, simply select the charges to be invoiced by checking the box to the left of the charge and hit 'Invoice Selected':

Removing or editing charges related to membership plans or add-ons

That's the membership charge removed now. What you need to do is then create a new one off charge, which you can price and label as needed, and then invoice.

Did this answer your question?